Exposure – Word of the Day 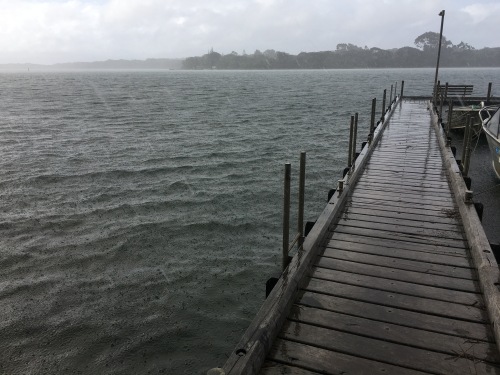 Fortunately we had raincoats and we knew the rain was coming, but nonetheless, with the wind whipping the rain along, and the cold air pressing in, we felt more than a little exposed. But, because we were prepared we enjoyed the walk. The tide was very high as predicted by the Weather Bureau. There was also a lot of flow from up-river after three major rain bearing fronts have been through and local flooding was expected. You can’t tell from the photo but the timber decking of the jetty looked as if it was floating as the water was touching the underside. We haven’t seen it like that for a while.

Weather exposure can be very serious, hypothermia or sunstroke, the risks are great if you’re not prepared. Preparation means covering up, sunblock, hats, raincoats, warm clothes, appropriate footwear. So that whatever the weather we put on what is necessary to be comfortable and to protect ourselves. However, we know not to wear winter gear in summer and vice versa, and usually we’re good at that.

We’re not so good with emotional exposure. We’re trained, or we train ourselves, to overprotect, and sometimes we wear the wrong emotional gear, like using the mask of happiness to cover depression, or the mask of confidence to cover fear. Rarely do we let others in, we become invulnerable, strong, a veritable fortress. Yet the best possible way forward, the only true way to wholeness is to trust others with our inner world. Of course, it goes without saying, you don’t grab a megaphone and announce your life to the world, but there are people in our lives we can talk to, take off our masks, and be vulnerable with.

As Brene Brown has said many times, in our society vulnerablity, to be exposed, is to be seen as weak. Brown counters this with “vulnerability is our greatest measure of courage.” Brown defines vulnerability as “uncertainty, risk and emotional exposure.” It is an opening of the self to another, whereby empathy becomes the healing counterpoint or the supportive staging point, depending on what we are going through. Brown’s research is thorough, and in it she discovered that every courageous act was underpinned by vulnerability. That tells me that we can only really flourish when we are able to speak our truth and take off our masks and be real with others, then we are whole and not just pieces or segments. The fortress life may serve us well but to really floursih we need to let the drawbridge down from time to time, otherwise we not only defend ourselves against the outsider, we imprison ourselves from the world. I’d rather be open than be a captive! Take courage. 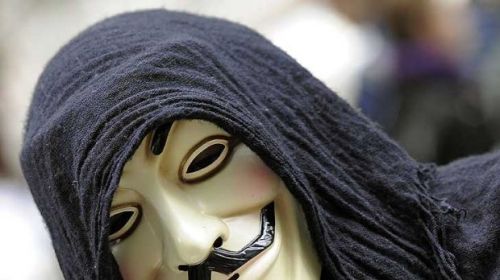 To wear a mask is to be intentionally faceless, or differently faced. The Guy Fawkes (he of the Fifth of November plot) mask has become popular, especially with the Occupy Movement (which is still active, if you were wondering) and Anonymous. It’s modern usage was inspired by the grahic novel V For Vendetta, which is a dystopian story in which the hero, an anarchist seeks to defeat the fascist government ruling England. Ironically, V desires anarchy – people will be allowed to do as they please, there will be no more control, yet this replaces the total control of fascism. One extreme to the other! I call V’s version ‘no-hopia.’ V’s dream comes to fruition even as he is dying, and in the novel it is the final scene where the lights go out on the freeway that makes the point, V’s mask hides another form of dystopia. England has gone from total repressive control to no control, and nothing in between. V’s goal was no goal.

One of the criticisms of the Occupy Movement is that it has had no real goal or drive other than to protest the evil of capitalism. Perhaps that is the frustrated view of those who expected anarchy, or revolution to ensue in some particular way? Another group, Anonymous have been associated with anarchism, exposure and disruption of governemnt and corporations. For me the Occupy Movement and Anonymous were symbolised by the mask, lacking face and lacking cohesion. In my view they were hiding even from themselves and perhaps, therefore, from purpose. Protest for protests sake goes nowhere, there must be resolve, there must be purpose, and it must be authentic.

We have enjoyed many masked heroes too. Batman stands out, but yet Batman is as dark as his enemies, and his mask belies the hero (which in reality I accept, who is perfect? No one is that good).

But Guy Fawkes never wore a mask. He was caught red-handed ready to light the fuse that would blow up the English pariament house. That’s courage, that’s purpose. Not that I’m encouraging anyone to rush out and follow his example (however …).

As e.e. cummings said: “The greatest battle we face as human beings is the battle to protect our true selves from the self the world wants us to become.”

Psychology teaches us that we all wear masks, to protect, hide, obscure, change who we are in differnt contexts. We seek to avoid being found out (the Imposter Syndrome), sometimes we believe we are unworthy and so we project a personae to cope, to win friends, to make our niche, to avoid being hurt. Sometimes we hide too much and people miss who we really are, or colleagues never really appreciate our potential, there are risks with masks.

There is always the real self, the deeper you, the authentic you inside. I want the real you.

Oscar Wilde once said: “Be yourself, everyone else is already taken.” 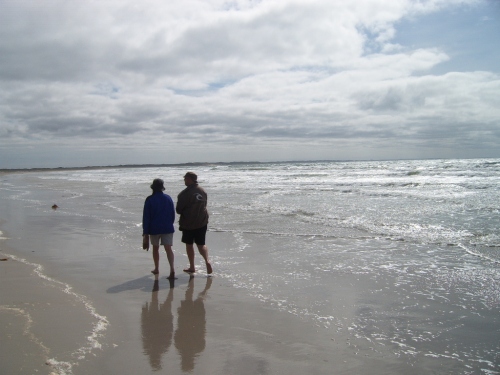 November is cool on the south coast, most especially in the morning, which is when we were strolling along the beach and Hayden had dropped back to take some photos including this one. We were totally unaware until later, when he confessed he’d taken this candid shot.

It reminds me that a candid view is always the one you don’t see or at least are not fully aware of. It’s the view presented on the street, at the beach, coffee shop, driving, working, socialising, shopping, and everything. Of course there’s CCTV everywhere, traffic cameras too. People are indeed watching. But my point is not that people are watching, who cares, but am I able to authentically be me where I am? The self conscious are never viewed candidly, they are always checking. The egoists are strutting, making an entrance, making a scene. No harm in that! However, masks aside, is the world able to candidly view the authentic me? Am I comfortable as me in the world?

When people talk about identity, I think of all sorts of angles, personality, character, experiences, vocation, passions, and also masks. The inner and outer me, who do I want you to see and know? I think of Janus too. We talk about “Showing up”, authenticity, being real. In the end, for me identity is a matrix, but at its core is the gold of integrity.

ramblings on creativity, mental health and a malfunctioning society.

Stay tuned for some Hotch-Potch.

The Mindful Homemaker by Divya

There is something good here, for everyone.

poetics~cool out of the rafters

what goes in must come out!!

building a better Travel and a better Me

Poetry in Space by Kiki
MorganTarot

Sewing and baking, while baking and sewing.

Enjoy the magnificent journey with me...

Infinity Essential
Conversations With Myself
lifeonmercury

ramblings on creativity, mental health and a malfunctioning society.

Stay tuned for some Hotch-Potch.

The Mindful Homemaker by Divya

There is something good here, for everyone.

poetics~cool out of the rafters

what goes in must come out!!

building a better Travel and a better Me

Poetry in Space by Kiki
MorganTarot