Froth, Perhaps the Best of Us 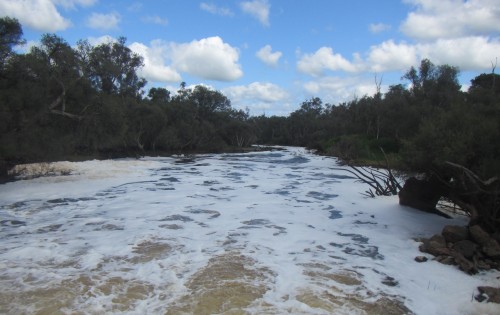 Taken a while back, the Blackwood River on the north side of Boyup Brook, froth in the foreground, foam to the middle left.

Froth in water, be it lakes, rivers, creeks or the ocean, is generally a combination of pressure or agitation (so, rushing water, or crashing waves creating bubbles), the matter from decomposing plants such as oils (in Australia one significant culprit is eucalyptus), dead plant tissues, dust making froth or foam, and protein (which is also a common contributor to foam in expelled urine). Many people imagine that someone has dumped detergent in the water, given the dramatic effect of the froth or foam, and yet it is all natural ingredients contributing to the phenomena.

Froth or foam is not ordinarily considered to be a negative. That which occurs naturally in water is quite normal and shows nature in process. In some circles a froth on top of a glass of beer is considered a good thing as it indicates that the beer is not flat or lacking. In firefighting foam has been utilized in combating fires involving flammable liquids, the foam restricts oxygen thus preventing fire. Detergent froth and foam is seen as useful in that the foam is the detergent becoming active when needed. And we have all at some point utilized pretrochemical foams in mattresses and pillows, etc. But froth and foam have been used negatively in literature. The old saying, “it’s all froth and bubble” is a form of ridicule applied to any situation you wish to criticise:- The speech was all froth and bubble” meaning, the speech was lacking substance.

Everything has its good and not so good side, or, everything has both strengths and weaknesses, froth and foam are no different. But the weaknesses are few and overall froth and foam make such a valualble contribution to nature and to life. In some ways we can see froth and foam as a metaphor for ourselves. We all have our strengths and weaknesses. I have a view that our weaknesses are few in comparison to our strengths, and we all make a valuable contribution, and often not just in our core vocation, but in what my grandparents might have considered stuff that was froth and bubble – hobbies, interests, leisure activities, creativity – the things that make us come alive, energise us and carry us (and others with us) through.

Froth and foam are the result of aggitation and energy and natural ingredients, this is not unlike ourselves. When we are aggitated, put under pressure, stimulated, enabled, we can produce all sorts of creative things. Froth and bubble are signs of life, signs of substance, a parallel to cream – the best rising to the top. When we are energised the creative rises to the top, sometimes dramatically, and for all to see, just like frothy waves, or foam enveloped waters. Life is not all froth and bubble, but when the good and the creative rises to the top it is to be seen, shared and celebrated.

I Churn For You

Lyn’s parents left us a milk separator, and butter paddles, there was even an old milk churn in the shed, but no butter churn. Milk separators do just that, separate the cream/butter fat from the milk. Milk churns are misnamed in my view – they’re just a large metal container for transporting milk. Butter paddles and butter churns do something else, they turn the butter fat from the milk into actual butter, they produce something.

Emotionally we churn. Surely you’ve heard the term butterflies in the stomach, a reference to mild worry. I don’t make a habit of it, my stomach rarely churns, but there are those rare occasions. If I’m going to churn it will be heights. I was fearful of flying, and my first few flights were nerve wracking, but I’m getting better at it. I engaged with abseiling, that was certainly nerve wracking, but I found I could even enjoy it. But with each activity, the night before I would be churning, worrying, mulling it over. By the morning I was no better, often exhausted from all the useless churning because my sleep had been interrupted or prevented by all the worry. Now it’s different, I find a mindful approach is helpful.

All the ancient cultures and religions relate strong emotional fellings to the stomach, hence the term “I have a gut feeling.” A churning stomach is, for many, a far too regular experience. Churning stomach often results from anxiety and stress. While the habit in days gone by (in the West) was to prescribe something, eventually there was a realization that worry was different to stomach ailments or sickness. A churning stomach is simply the body getting our attention that we need to make some adjustments to whatever the body is registering.

The ancient cultures and religions, (and now) modern medicine, suggest more simple, even commensense remedies to help end the churning: Adjusting diet (reducing sugar, caffeine and alcohol, other stimulants, large meals in general), exercising, and ensuring adequate sleep. In addition, and more importantly, a mindful approach is beneficial: adjust your breathing (awareness, calm breathing), relaxation, reduce stress (awareness), meditate, rest, and adjust whatever it is that is the cause of your churning. If we don’t take steps to adjust and change, then why expect anything to be different? For me, rest, creativity (simply writing or painting is a wonderful reframing), exercise, and meditation make all the difference. Stop, breathe, reframe, and arrest the churn. 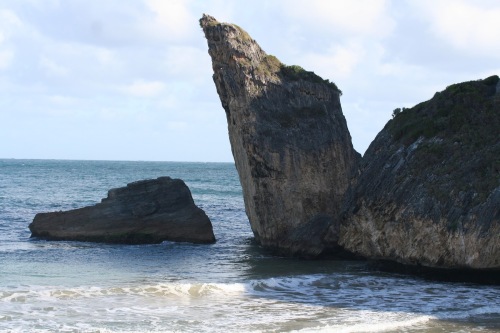 It’s known as Cathedral Rock (Windy Harbour), I get it, it’s quite large, it reaches skyward, spire-like. It was clearly someone’s imagination, and I get to share in that a little. However, if inclined, I can use my own imagination and come to my own sense of this rock, I thought of it as The Leap, the rock in the water having already done that.

I have met people who claim they have no imagination, or they only have a limited imagination. Initially I react to that with sadnness, but I question their premise. I think they have not had the encouragement, and probably the opposite in fact, to explore their capacity to imagine.

My imagination was given free reign. My mother indulged me in imaginative ways. She made cardboard castles and forts with working drawbridges (it’s amazing what bobbins and string can do), she taught me to imagine that my toys were real in the play moment, the cars, the plastic farm set, the soldiers, the trains. The best gift to my imagination was that mum read to me and taught me to read very early.

Reading took me to other worlds, and worlds I could extend, or place myself in. The Last of the Mohicans, Treasure Island, Pirates and Amazons, The Secret Seven, all fueled my mind and my play and creativity. These gave way to Asimov, Tolkien, CS Lewis, Donaldson, Moorcock, Rowling and more. Best of all were the poets from Donne to Oliver, and music, of course. It flowed out into writing, poetry, painting and more that I have passionately engaged. Imagination gave me new eyes, a different view. Which reminds me of one of my favourite quotes, which is related:

“The real voyage of discovery consists not in seeking new landscapes but in having new eyes.”  Marcel Proust

Disobey is my middle name. I wasn’t born to follow inane laws and trifling regualtions. I was born for love, passion, and creativity. I hated the institution of school, yet I really loved learning. So I bunked off, or as we say here, I wagged most of my upper school. Mental health days too were importnat in my early work life. I wasn’t keen on the institution of the church either (which is deeply ironic), but I subverted that at every turn and still do when opportunity arises to be creative with it. I couldn’t tolerate School Army Cadets, I couldn’t take it seriously and they were glad when I left. I did love Scouts, but hated the constrained process, I lasted the longest there and learned a lot, but in the end I left because I really couldn’t sing national anthems or dib, dib as we were supposed to say. My mother was always horrified that I would break rules in general ( I still do) like parking the wrong way round or worse, much worse (a tale for another time). Street racing in Perth in 70s, such fun! Life is not monochromatic, it is not cookie cutter sameness, it is not doormat living, or institutional slavery. Life is authenticity, honouring the inner being, the inner child too, and our creative bent. Just be, and if that means disobeying from time to time, then do, it’s good for the soul.

Imaginary (It isn’t hard to do)

Image is the root word, so imaginary is an image only in the mind, not real.

Some people recount having had an imaginary friend as a child. I never did. However, I did use my imagination in other ways. I had, for a short time, an imaginary place, a jungle. It was simply (on our large block) my father’s overgrown veggie patch where I hunted tigers and lions and camped. I also remember lying on the grass, looking up and seeing all sorts of things in clouds (I still do).

‘Pan’s Labyrinth’ is a profound movie. Though dark and confronting, it shows how we use imagination, how the imaginary works, how it can be an insight into our self.

Both Freud and Jung worked positively with the imagination, as with dreams, it is a key or gateway to the inner workings of a person. the imaginary always lilnks to something real, something experienced, something known.

In that sense, imaginary may be, on the surface or to the untrained person, not real. But to the insighful and the aware, the imaginary is an insight to the workings of the self and a portal to creativity for all ages.

Cook with me
Apoorva Srivastava

Just the collection of random thoughts.....

Fevers of the Mind

Enjoyable Information. Focused or Not.

Live Up The Senses

When I was young my dad would always say, "Crystal, you can choose your attitude." One day I chose to believe him.

Cook with me
Apoorva Srivastava

Just the collection of random thoughts.....

Fevers of the Mind

Enjoyable Information. Focused or Not.

Live Up The Senses

When I was young my dad would always say, "Crystal, you can choose your attitude." One day I chose to believe him.