Deviate – Word of the Day

I once took an unknown path that led
across lichen encrusted granite.
I slipped and bruised easily.
But I made it to the top.
However,  it wasn’t really that.

I once walked blindly into solid bush
certain it was virgin.
Scratched, sore and hot,
I found the center and a rusted coke can.
So, it wasn’t quite that.

I once climbed a mountain,
a torutous path.
Wind, rain, burning sun.
I reached the awe inspiring summit.
It was almost that.

I once followed a tiny creek line,
there was no trail.
I heard frogs and birds,the rustle of leaves,
I smelt the humus and the sweet air.
It was close to that.

But it wasn’t my conquest,
or my discovery.
It was something deeper,
It was everywhere and everything,
and it was nowhere in particular.

At once it was synergy,
congruence,
a oneness, a different discovery,
where I belonged in the bosom of the earth,
and it belonged in me. 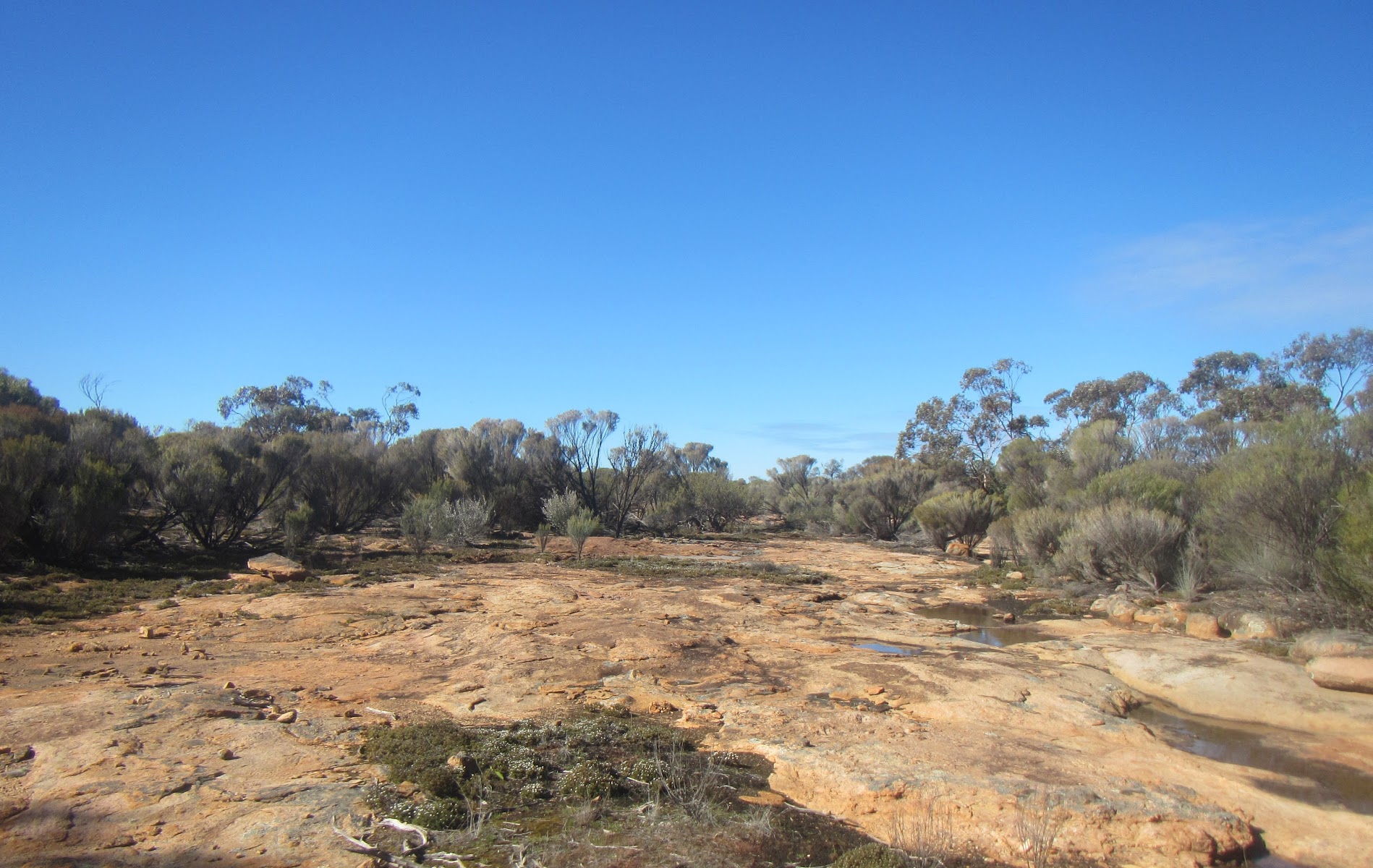 When was the last time you varied your route? When did you last enjoy a challenge like a side path or rock outcrop, a creek line, frogs, birds, moist earth?

When out in the bush, any possible path or route is likely to be a deviation for me. I am definitely curious and I love surprises and challenges. So another stop along the Norseman –  Hyden Road along the Woodlands Discovery Trail, just to see. A granite outcrop, a running creek, and a view from the rock, birdsong, and a variety of woodland flora. Well worth the deviation for such simple yet rich pleasures, and oneness.

Mystical – Word of the Day

The Blackwood River, Augusta, looking north east, one of my mystical places.

Mysticism comes from thε Greek root of μυω, which means to conceal. Mysticism crosses every religious boundary and belief system. That which is mystical is hidden. In the great debates about God from a Christian point of view there is the mystic view that God is both knowable and unknowable at the same time, that as such, there are elements of God that are visible, definable, but that mostly, God is concealed and unknowable.

Many have pursued mystical experiences. Aliester Crowley (1875 – 1947) was one of the most famous occultists of the twentieth century, trying to make connection with a world beyond. Carlos Castaneda trained as a shaman and explored mescalin using peyote as a mystical experience, inspired by the Toltec. Timothy Leary went with the synthetic drug LSD. There are trance groups, fasting practices, musical experiences, ritual practices and more. True tantra, like Tibetan Tantra, was only ever a form of meditative practice whereby the delay of orgasm and the control of orgasm is said to increase ecstatic experience, but for the purpose of prayer and meditation (and should not be confused with “Californian tantra” as I call it, or with Hindu left hand practices). Kabbalah originated as a Jewish mysticism, but now has non-Jewish paths as well. A number of celebrities have dabbled in Kabbala from Elizabeth Taylor to Madonna.

In the third and fourth centuries Christian men and women from Israel, Jordan, Asia Minor, Egypt and North Africa went in droves into the deserts to develop a communal and contemplative life. And from John Cassian to Theresa of Avilla, to Thomas Merton, a few Christians became mystics, seeking the unknowable God.

I think the unknowable attracts, and we pursue it, partly to make it known, to unravel the mystery, to bring the hidden into full view, in the main, to experience what is concealed. Most of the writings of mystics that I have read reaffirm that God, Other, the divine, is unknowable, but that in the journey of mysticism, there is connection, ecstasy, love, wholeness, union and more.

For me any sense of the divine comes more through nature and the contemplative. The photograph shows a familiar walking space I take in, some days it is beautiful, some days it just is, but always it evokes a sense of mystery, of the divine in some way. There is something about certain places that does that for me. Uluru, Kata Tjuta, Elachbutting Rock, Boranup Forest, and more, are places that move me deeply, places where I sense an otherness beyond myself or other people. I have felt ecstasy in these places, I have been overcome with joy, they can be erotic (in the pure, emotive sense) experiences, I have experienced deep inner stillness, and sometimes a confusion of feelings rushing in all at once. Such things tell me I am more open in these spaces, yet I also know that my openness is also because I sense something more. This for me is the mystical.

As Van Morrison wrote in his song “Into the Mystic” – “Let your soul and spirit fly into the mystic.”

Van Morrison “Into The Mystic”

What Does It Mean To Be Foreign?

Graphic comes from livingwaterlutheran.com via Bing

I wonder if the word foreign might eventually be redundant?

Where I grew up in England, my mother from Derbyshire, father from Nottinghamshire, we had dialects, and there were inflections and local flavours within regions and districts, you were foreign if yo came from 10 miles away. I was once asked by an Australian work colleague to translate what a tradie from Yorkshire was saying, he assumed, even though I had migrated as a mere child, I’d know! What astounded me was that it didn’t seem that difficult to understand what said tradie was saying. In Australia, there are subtle accents between east and west, and a variety of indigenous languages. Across this vast land there is also a sense of the local, which has become important across activities such as sport, politics, but especially federal funding.

I was once appointed to serve three towns. I was based in a main centre and would visit the other two on a rota. Once, while in the smaller of the three towns, on market day, I got chatting to some people who were passing through. One of the locals who knew me joined the conversation. At some point one of the visitors asked if I was a local. The local said I was not, and I said I did. There ensued one of those useless exchanges – no you’re not, yes I am. This went on for a split second or two with much positioning and my answer’s better than yours. The true local pointing out that I lived 45kms away in the big town. At some point the visitor asked what I meant. People really shouldn’t ask me questions, it gets tricky, I love to engage, I’m passionate about what I believe so they should be warned.

Little did the visitor know I had been waiting a lifetime for this question.

My answer: I’m local to Australia. Blank stares all round. Then the penny dropped. Derision followed. I never did convince them. Apparently you have to come from somewhere, belong somewhere, be part of something, or the nation, the world, cannot function.

I belong to a small circle of friends who firmly hold to the notion that we belong to each other, and not to any flag, state, or bounded ideal. We don’t much care for petty idealism, sabre rattling politics, flag waving jingoism, or some hyped pride based on place or space. Besides, those beliefs and behaviours have not got us very far.

As the graphic suggests, I’m more for reaching out and taking the hand of another, irrespective of any standard defining characteristics, be they colour, belief, birth country, sexual orientation, class, income, education, and etc. The word foreign is a divisive word, intentionally so, as it defines if you’re from round here or not. I accept that people take pride in where they’re from, and that they need to have conenction and identity, but I wonder if we can dial that back a bit, and focus on being present to hospitality, need, helping, journeying with the other? As is often said, we need to look for what we have in common rather than what divides us.

One of my main influences in life has been music. I have particularly admired Peter Gabriel, formerly of Genesis, who helped pioneer World Music in the late 70s as a fusion of styles and genres working together. Paul Simon has encouraged working with artists from other cultures, notably his album Graceland was founded on this ideal. Robert Plant has similarly worked with and encouraged artists from all over the world.

I was never a diehard Glen Campbell fan, but this song was influential in my thinking. It makes a great point: if we see our brother/sister standing by the road, carrying a heavy load, then it’s up to us to help share the load, to enable the other to get by, to get along. The refrain, “You’ve got to try a little kindness …” is perfect for our world. If we show a little kindness, then the definition foreign becomes redundant, and all people are from round here.

These days I’m local to the globe …

One of the greatest gatherings in the world is the Maha Khumbh Mela, at the 2013 gathering there were 30 miliion people. This particular gathering occurs every 12 years, and is popular among devout Hindu worshippers who come to bathe in the holy waters of the river at the sacred site of the Kumbh Mela. It is considered the largest gatheing of humans on earth. The tent city is so large it has been photographed from space. It would be amazing, and clearly important to those engaged with the devotional aspect, but perhaps overwhelming too.

What stands out for me is that place and story are so significant for many people and provides religious and cultural connection at a very deep level. You don’t get 30 million on a whim.

Life is a story, waiting to be told

I write because I must.

"Press the world in your words"

Cheers to A Happy Life.... A Happy Reading 🥂

I write to make Him known!

Where Books and Dogs Travel through History

A walk through the blues of life!

Advocate for Well Being

Story Of The Footloose

In the end all you want is a pen that writes well and a life that you've lived well.

Life is a story, waiting to be told

I write because I must.

"Press the world in your words"

Cheers to A Happy Life.... A Happy Reading 🥂

I write to make Him known!

Where Books and Dogs Travel through History

A walk through the blues of life!

Advocate for Well Being