“Hope is the thing with feathers that perches in the soul.”  Emily Dickinson

Questions dawned
as I wandered the edge of my garden,
the borders of my day,
I stooped to retrieve a feather
which answered my question,
“How shall I?”
with such a lightness,
that spoke,
“Take flight Little bird,
take flight.”

Bricks thirsty
the building dejected, lonely,
divorced from the life once given
in architectural matrimony
a fidelity now forsaken as
adultery claims newer, younger designs,
so, she tries
and puts on some makeup
over the tired foundation
offending some with her
bold and gaudy style,
while others tut-tut
complaining that she hasn’t
done it right,
too random,
too modern,
reckless,
uncouth,
some smile warm, welcome smiles
and greet her as an old friend
refreshed, lively, and
beautiful again.

Note: I think I might be alone in the world but I applaud Graffiti, sanctioned or otherwise, I find art anarchy refreshing. But there is a distinction between graffiti and tagging. Tagging is simply names, numbers and codes for those claiming a tag challenge on public property and it is not art, whereas Graffiti is art.

Photo: My thin places are the bush: A walk trail near Bridgetown.

The ancient Celts believed that there were places one could go where people and the spirit world could touch. The Celtic influence on Christianity was such that this belief carried over, that the veil between heaven and earth was thin or transparent. The barrier between human and the divine were almost non-existent. For the ancient Celts these places were mostly forrest groves, but in other cultures they are rivers, billabongs, monoliths, mountain-tops, caves and more.

Not the same, but related in some aspects, the Australian Indigenous peoples created songlines, which trace the creation of the land, the fauna and lore, by ancestral spirits. Indigenous Australians used the songlines as navigation paths, for social connection, cultural knowledge – especially coming to know the flora and fauna, the availability of water, the types of seasons, and how it all came to be. Songlines are places to touch the past and the present.

My thin places are in the bush, these are liminal, threshold places, where the mind transcends the ordinary, where the soul is restored, where the heart is lifted, and the eyes are filled.

Thin places might be Angkor Wat, Machu Picchu, Uluru, Chartres Cathedral, the Pyramids, the Himalayas, the stars, meditation, music, art, and more, places or experiences of place that awaken the soul to something more, something outside the self, something veiled but near. Whether or not this is a spiritual experience or a transcendence of some other kind, thin places are restorative, they are places of contemplation, places of beauty, awe, play, rest, and renewal. We all need thin places, we will know them differently, but we will know them. They are treasures to fill the soul.

John O’Donohue wrote: “When you begin to sense that your imagination is the place where you are most divine, you feel called to clean out of your mind all the worn and shabby furniture of thought. You wish to refurbish yourself with living thought so that you can begin to see.”

The New Age (whatever that’s meant to mean, usually a load of ignorance about matters that revolve around spirituality and philosophy), an aged wine or whiskey, the maturing we embrace or endure depending on what day it is and our perspective. Age is relative.

Rock of ages. You can see the weathering of extreme heat and cold, rain and wind on these sandstone formations. Landform created by erosion. Tough, but yet soft enought to mould. Up close they are a complexity of form, standing back they are a work of art, a great sculpture. A bit like humanity really, weathered, matured with age, complex, a work of art. The rock is a metaphor too.

I love Experiemntal art, in all media forms. This is an acrylic piece I did five years ago using texture and thickness of the medium to add effect. It’s title is ‘Life’ 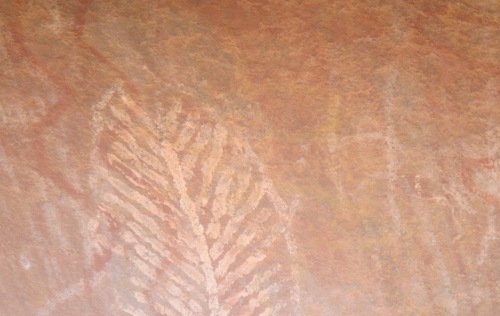 There we were at Uluru, and in a part I hadn’t been to previously some years ago. There was, and not uncommonly, an overhang or shelter in the rock, and on the surface of the shelter there was this faint art work, which is ancient. I just cannot remember the meaning of this particular piece (others will remind me), but in every way it holds a significance and beauty I cannot put into words – you had to be there to experience it. What moves is the age, the simplicity (in my perception), the depth of meaning behind the simplicity, and just the simple fact that here I was, in 2017, close to this work which was ancient. Who had communicated this, what was it like, what did it say about them. However, the author of this work would probably ask no such questions. For me it was faint and faded but precious. And a faint call that turned to a roar,  of something about relationship, otherness, community, and life through time. Life in presence, attention and awareness. Strange how something faint, something beyond my experience, could be so profound and powerful.

I always think of art, and in particular Salvador Dali, when I see the word surreal. The picture is Dali’s ‘The Persistence of Memory’ 1931 (found via Bing images) a painting of soft, melting pocket watches. Dali stated that his worls were “hand painted dream photographs.” It is arguably one of his most famous works. With surrealistic works, as with all abstract work, it is really up to the viewer to venture an interpretation. Dali never made his interpretation public. The consensus so far is that it is about decay and deterioration of time. There is light and dark symbolism as well as the theme of hard and soft. What could be more surreal? Well, sometimes my life is a little surreal. 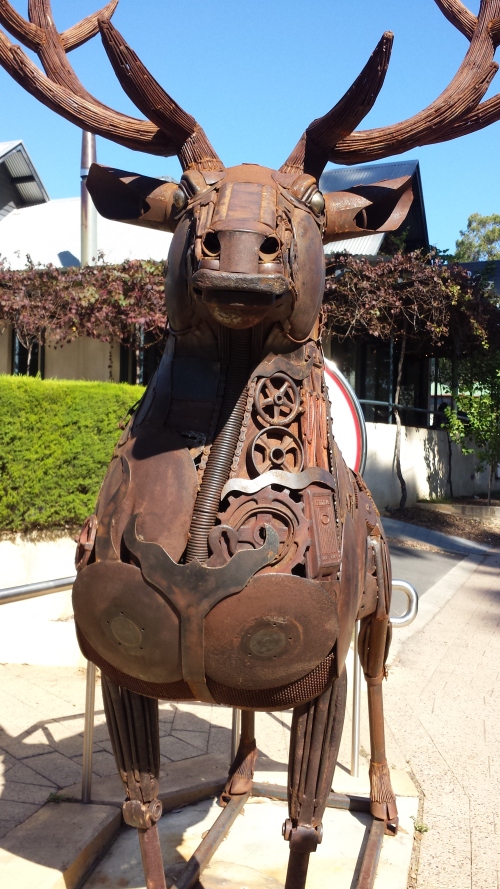 A fiercesome look, but yet a very tame reindeer. Steampunk style, by artist John Sprigg of Narambeen. what a wonderful work of art, using scrap metal off the farm. What an amazing eye for shape and fit, what a gift that we can share in, a feast for all.

I love creating, and I love other people’s creative ability too. February 2013 Lyn and I were down at Windy Harbour and we took time to go to the Northcliffe Visitor Centre and take in the Forest Sculpture Walk, an amazing experience.

This photo is not as striking as it lost the sheen of the gold paint the artist used to colour the dead remnant. I was captivated by the glow of it, very creative.

There were many sculptures to view. I’m told that there are some new additions, and that the trail is recovering well from the bush fire of 2015.

Philosophiæ Naturalis
The Flower that Blooms in the Evening

The Yogi From Yorkshire
Story Empire

Exploring the World of Fiction

Philosophiæ Naturalis
The Flower that Blooms in the Evening

The Yogi From Yorkshire
Story Empire

Exploring the World of Fiction