I say, I never thought I’d write an essay about assay! 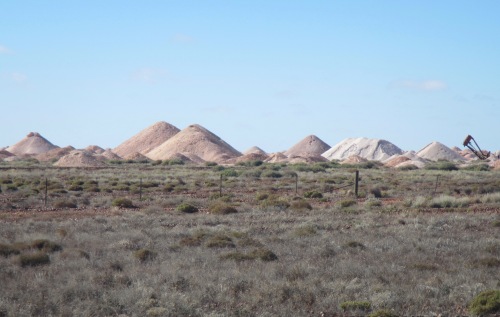 Coober Pedy, South Australia, the opal capital of the world. More than enough assaying going on to determine the quality of the rock and ore turned up.

That’s easy these days, assaying is well provided for with pleanty of laboratories vying for work in the mining industry.

The lab of love is to experience the liminal, to hear the heart, to know its beat, to feel it, and to gaze into the soul of the other. The proof therein is the gaze returned, the love enjoined, the pulse of love reciprocated. Love is only ever real if you give it and receive it. The real proof of love is how you live it.

In the world around me the feedback loop is consistent: “I’m stressed, I’m frazzled, I’m bogged down in work, I can’t see a way through, I’m worried.” Anxiety, according to a multiplicity of studies across the western nations, is on the rise, and across age groups. I have friends who are afraid to take time off work for legitimate reasons lest they lose their job (which is unlikely), while other friends are reluctant to address work issues – they don’t want to rock the boat, they don’t want to risk their reputation, they don’t even stand up for themselves let alone other people. It’s almost like we’ve become servile, frightened people. In looking at it from a different perspective, people are overloaded and weighed down by work, responsibilities, and relationship difficulties.

Perhaps I sound simplistic, but my concern is that we don’t tend ourselves enough! Or, perhaps more accurately, we don’t tend to ourselves appropriately. We read about mindfulness, contemplative lifestyles, minimal living, self-care, but when do we actually put it into practice? My concern is that mindfulness is currently the most written about topic and yet is the least practiced way. Sure, we might go to yoga now and again, take the odd walk, meditate periodically, take the occasional break, but we are inconsistent, and lacking commitment to go the distance (which in fact equates to lack of commitment to self). And we suffer for it, we live in an imbalance.

Without mindfulness we are more vulnerable to the ills we read about, depression, anxiety, lack of self-worth and so on. Mindfulness is not a cure all, but if approached and lived in conjunction with healthy living and a balanced diet, then it is going to make a positive contribution to our overall health. Which is a reminder that there is no one way or silver bullet solution, we need a balanced life to survive.

Tending self is about taking breaks, going on holidays, exercising, spending quality time with family and friends, meditating, reflecting, and just getting down to being. Tending self is not about a singualr focus on the self, it is really a focus on relationships (which means a relationship with nature too) and health. Is it selfish to tend to self – well yes, but in a positive way. The word selfish has had some really bad press over the years, but to be selfish is to really look after oneself, not to exclusively self-indulge, but to care for oneself as one has need. If we are to flourish we need to nurture ourselves. Sometimes I think we need to be a little more selfish and tend to self, only then can we tend to others and the world. 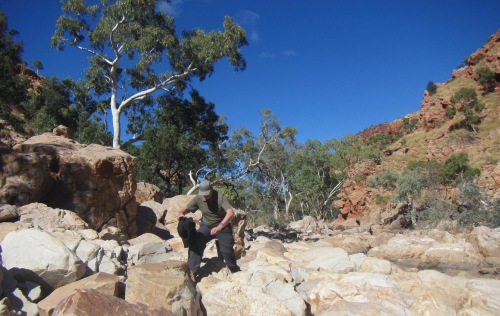 I love bush walking and hiking, but I really don’t enjoy rock scrambling. I’ve never had great balance (compounded by a car crash which resulted in a broken jaw some decades ago) and I tend to struggle going across rock. What I do sign up for are challenging walks, simple walks, beautiful trails, but I never really want to tackle rock. Rock is hard work for me, and best left as the road less travelled. Rock also slows me down (on this particular day we took half an hour to clamber over the rocks to get to the gorge, and only over a short distance), I am more tentative, being particularly careful to place my feet and keep my center of gravity, to avoid breaking bones or falling over. A bit like life really, there are the smooth bits, the challenging bits and the difficult bits that require care to navigate lest we become to damaged or fall down.

Tagged as care, Enroll, granite, gravity, I Didn't Sign Up For This, rocks

Truths of mine, in which I hope you find yourselves

on Life, Love, and Faith

Welcome to the artistic words of creative writing

Why search for logic in everything?

My life down the Rabbit hole

''A rabbit hole is a metaphor for something that transports someone into a wonderfully (or troublingly) surreal state or situation''.

I’m an avid movie-goer, enthusiastic blogger, and a full-time law student on the side. Bit of a nerd. Embarrassingly romantic, lol. General cinephile.

Life, with my dogs, living on one acre in Tasmania. Living on a low income, and with Complex PTSD. I write about all sorts of things. I called my Blog Echidna Home because I have echidnas that live here

She Got Wings!
Daphsam Photography & Art

Truths of mine, in which I hope you find yourselves

on Life, Love, and Faith

Welcome to the artistic words of creative writing

Why search for logic in everything?

My life down the Rabbit hole

''A rabbit hole is a metaphor for something that transports someone into a wonderfully (or troublingly) surreal state or situation''.

I’m an avid movie-goer, enthusiastic blogger, and a full-time law student on the side. Bit of a nerd. Embarrassingly romantic, lol. General cinephile.